Improvising a New Life Together (Literally)

Posted at 13:02h in Reinvention, Relationships by Lauren 1 Comment
0 Likes 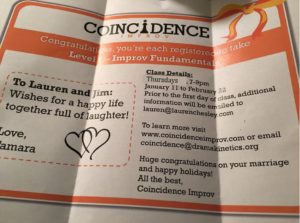 What kind of wedding present is this? It looked like an AA meeting or family support group. 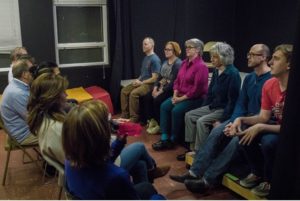 What have Old Spice and I gotten ourselves into?

But there we were…in a church basement seated in a circle on aluminum chairs with 12 complete strangers on a Thursday night. Is this an intervention or a wedding present?

“Welcome to Improv class,” said our teacher. How we got here requires a bit of background. 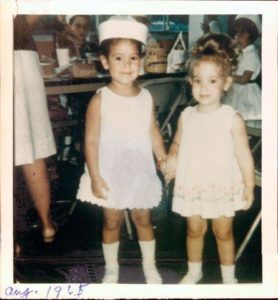 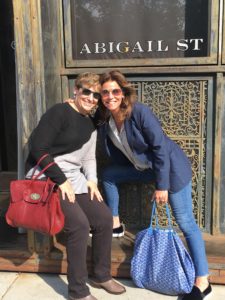 My oldest and dearest friend of 54 years is Tammy. We have known each other since we were two weeks old. She was always the smart one. She is also known as Dr. Tamara Sher, PhD, specializing in marriage and family therapy. So, when she advises something, I’m trying harder this time around to listen to her words of wisdom. I was obviously not paying much attention with my first marriage.

Her advice, her generous wedding gift to Old Spice and me was that she would “sponsor” a class. Something we could learn and experience together. It had to be something neither one of us had done before or something that neither of us already excelled at. A new experience on an equal playing field.

Tammy suggested Italian cooking. Old Spice said he was afraid of the kitchen. He thought cooking would be dangerous. You could cut or burn yourself.

Tammy suggested a pottery class. But if you’ve ever seen the Demi Moore movie, “Ghost” you can’t compete with that scene at the pottery wheel with Patrick Swayze. Besides, Old Spice thought pottery seemed messy.

On and on. Tammy suggested, we explained why it wouldn’t work. Tammy searched (she was relentless) to  find us something.

And then the email arrived. Coincidence Improv Level One. Our newly married selves were going to Improv Class.

And we LOVE it!

It’s an equal playing field.  Old Spice is a natural. He is already my Larry David, Woody Allen, Steven Spielberg look alike. And me? I can always find something to talk about. I make friends easily. People will like us, right? Besides, now we have something to do on Thursday nights from 7 to 9 pm. It’s a regular Thursday night “Date Night”…like the movie starring Tina Fey.

Google Maps got us to our church basement 15 minutes early. The “pre-game” martini (the two of us at the bar near the church) was definitely a good idea. I was nervous…and perhaps we were a little over dressed.  Thank God I convinced Old Spice to at least wear khakis and change out of his gray suit.

We found our way to the circle of strangers half our age and I texted Tammy, “I am going to kill you.”  This was full exposure. I was wishing this was an intervention or AA meeting.

Even though there is no “wrong” in improv, getting it right is tricky. You really have to listen…hear what your partner is saying and actually be able to go with it, quickly and off the top of your head. And you have to be witty, funny, authentic and unselfconscious–not worrying if there is a right or wrong answer. Trust your gut. Let it go. Not worry what everyone thinks about you.

Guess what? Improv is hard!

I tend to over-judge. Old Spice, on the other hand, is a natural. On a normal “Larry David” kind of day he says the most random things, always brilliant and witty.

The first hour of class seemed like an eternity. It was only 8 o’clock and I was sweating…wishing I was wearing sweatpants instead of a cashmere sweater and jeans that were cutting off my circulation. Where is my Tina Fey when I need her? 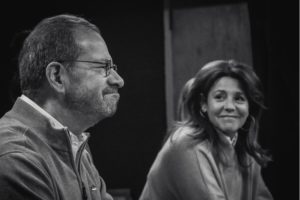 But then the second hour approached and I looked across the room. Old Spice was laughing, making some new friends. Totally engaged. Totally himself. I no longer needed to be Tina Fey. I just got to be me: random and silly and certain that I often sounded like a complete idiot.

But who the hell cares?  The second hour went way too fast. We were totally into it. 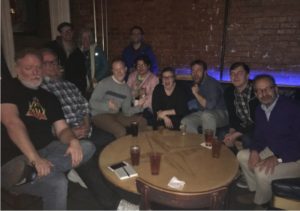 The third “extra credit” hour we found ourselves at the bar across the street having a round of beers with my new stranger-friends from the circle. Because I was actually listening, I actually know all 12 names. I even know Deb from Deborah. I have a feeling we will be hosting the cast party after the class finale in February. 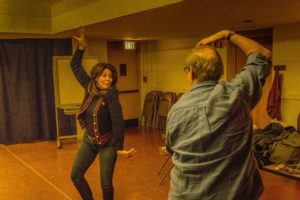 If it was my scene I would have been superwoman who came out dressed as Princess Di.  What can I say? Everyone has their thing, and there is no right or wrong.

Thank you Tammy — thank you for knowing that every couple needs to find their “we.” Those experiences that only they share and that will create the memories to share in years to come. Sitting on the couch with Netflix doesn’t do it.

Tammy says she is coming to the final performance in five weeks.  Friends and family are invited.

It is likely that Tina Fey and Will Ferrell will not be out of a job, but I love our Thursday nights: our martini, our random circle of 12 classmates, just learning to let it go, to laugh a bit…and to trust yourself and each other.